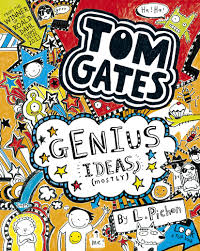 I have chosen this book because it arrived from the book club where I had ordered it and I couldn't wait to read it. There are three other Tom Gates books before this one and  it is hilarious as the others, with great pictures too. The Tom Gates series has won FOUR AWARDS, Shrewsbury Bookfeast award, Roald Dahl funny prize award, winner of the Best Book for Younger Readers Red House Children's Book Award 2012 AND winner of the Waterstones Children's Book Prize 2012, PHEW! On a scale of 1 to 10 it would give it... 8.5 (if that comes in on the scale). Tom Gates is based on a boy named Tom going about his daily life (a bit like Diary of a Wimpy Kid).It's full of jokes and my mum and dad want to know why I'm laughing my head off at it. If you don't normally read much, I'll bet this will help you to start reading more because its so funny. It also includes a flip book with a bug dancing and at the back it shows you how to make a paper banger. Here is the 1st, 2nd and 3rd: 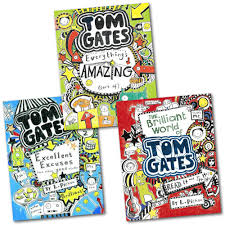 The next Tom Gates book (Tom Gates is absolutely fantastic at most things) will be out in April 2013. ﻿
Posted by Matthew Swain at Sunday, October 21, 2012